Saša Begović is an architect and partner in the 3LHD studio. The studio is intensively developing the interaction of different disciplines; architecture, urban and landscape, design, art, and also explores new possibilities of interaction between architecture, society, and individuals. During his career, Sasa Begovic has led many award-winning projects of various typologies: public, cultural, residential, sports, and mixed-use facilities.

Projects such as Veterans’ Bridge and Zamet Center in Rijeka, Bale Sports Hall, Croatian Pavilion at the EXPO 2005 in Japan and 2008 in Zaragoza, Splitska Riva, Lone Hotels, Adriatic and Park in Rovinj, Aquarium and Museum of Rivers in Karlovac, Urania – creation space, Bužanova residential block, Infobip HQ, Rimac Campus are just some of the more important study projects.

They have won important international awards, including the A + Award for Architecture + Landscape, the European Hotel Design Award for Best Hotel in Europe, the WAF Award 2008 for Best Sports Facility at the First World Architecture Festival, the IOC / IACS Award for Best Sports Building, the AR Award for the best new architects, the ID magazine award, as well as the most important Croatian professional awards: Drago Galić, Bernando Bernardi, Viktor Kovačić and Vladimir Nazor.

Since 2021, he has been an associate professor at the Faculty of Architecture in Zagreb.

Sonja Radović Jelovac holds a PhD in environmental design and planning. She completed her primary studies in architecture at the Faculty of Architecture in Belgrade, and later, a Master’s degree fellowship from the La Sapienza University in Rome at the Ludovico Quaroni Faculty of Archecton, where she obtained her Master’s degree from the Department of “Planning, Landscaping, and Reclamation of Urban Land in Developing Countries”. As an achiever of an international scholarship to La Sapienza University in Rome, she earned her Ph.D. in 2015 and attained her Doctor Europaeus title. Within the scope of her doctoral thesis, “Projective” Resilience Assessment for Water Sensitive Adaptive Urban Design, she makes an authentic contribution to scientific progress in the field of contemporary research in the field of new paradigms in design and adaptive eco-urban design through the prism of collaborative resilience.

She is a curator of the Montenegrin Presentation Project at the 16th Venice Architectural Biennial 2018. She is engaged in research in the field of resilient, adaptive urban design. She has successfully applied the experimentally transdisciplinary approach and 20 years of design experience through her work at Studio Synthesis, as the founder and lead architect.

She is engaged as an itinerant professor at the Faculty of Architecture in Podgorica in the subject Urban Design and at the University of Trento in Italy (2018). 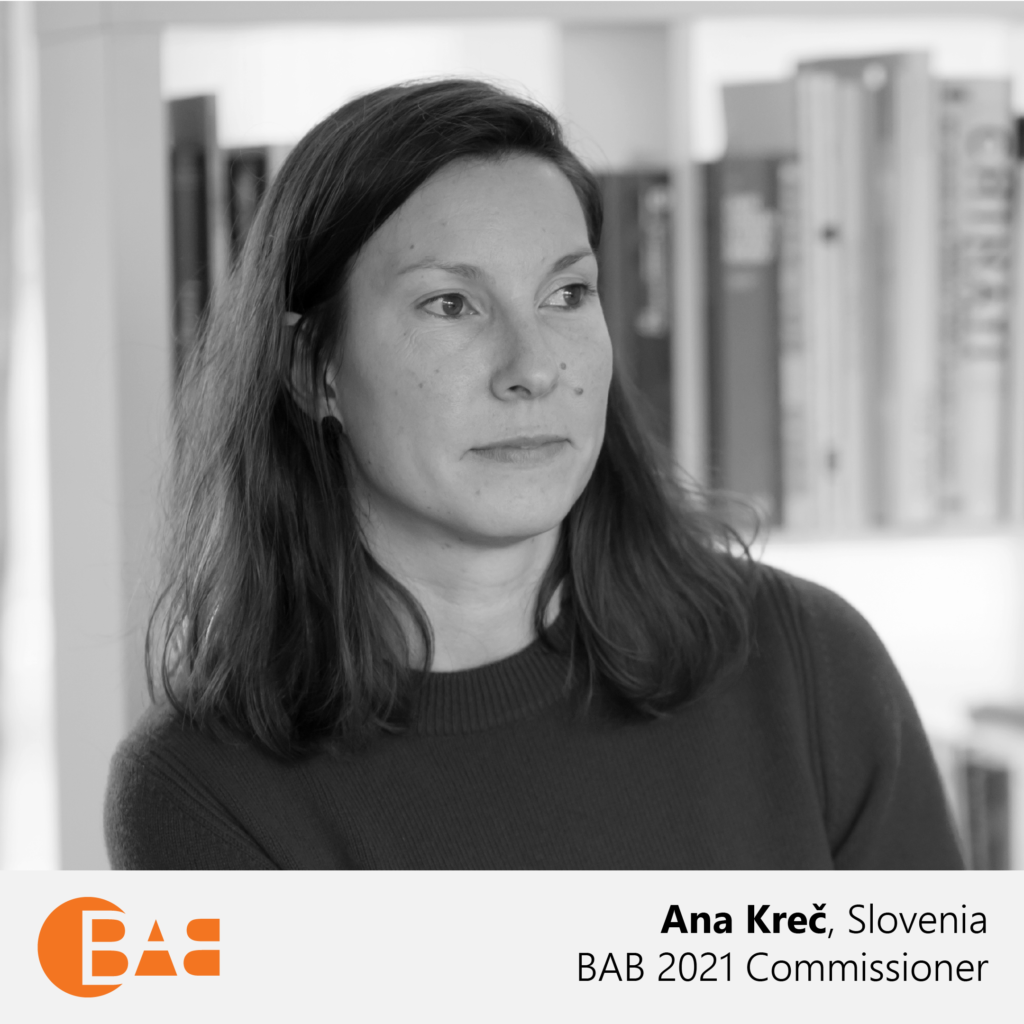 Ana Kreč graduated in 2009 at the Faculty of Architecture in Ljubljana. During her studies she attented an exchange program at the Faculty of Architecture and Design in Aalborg University in Denmark and later worked at Terroir Architects in Sydney, Australia. After graduation, she worked at Sadar + Vuga Architects in Ljubljana, Slovenia where she collaborated on large scale redevelopments like Sports Park Stožice and Cultural Centre MAKS in Maribor.

Together with architect Jure Hrovat, she in 2010 co-founded SVET VMES, a collective of architects based in Ljubljana, joined by an urge to explore and expose the spatial, social and informal learning potential of ‘in-between’ space within Slovene educational buildings. In the last ten years SVET VMES self-initiatively approached and analysed 36 schools without any private nor governmental financial support. In 24 case studies, this initial analysis was taken further in a form of a scheme design project, this now resulting in 52 smaller, low-budget, built interventions, many of them awarded. In 2018 SVET VMES won the 1st prize for a 16-unit kindergarten in Kočevje (now under construction), whilst receiveing a nomination for Plečnik Medal for Contribution to the Enrichment of Architectural Culture for Architectural-Research Project on Intermediate Schools Spaces through Construction of Case Studies in 2019.

From 2012 onward, Ana Kreč works as an assistant to prof. Jurij Sadar at the University of Ljubljana, Faculty of Architecture. In 2015, she recieved a 18-month Marie Curie Fellowship at KU Leuven, Department of Architecture, Campus Sint Lucas Brussels in Belgium where she commenced her practice-based PhD, under supervision of Prof. Dr. Architect Jo Van Den Berghe, within the EU funded ADAPT-r program. She is from October 2017 fully employed at the Faculty of Architecture where she is remotely continuing her doctoral research, whilst creatively leading SVET VMES Collective. She has been lecturer or guest critic at the University of Ljubljana, Tsinghua University, KU Leuven, University of Westminster, NTNU, Trondheim School of Architecture and Fine Arts, Norway, TU Wien, IUAV and TU Berlin.

Florian Nepravishta is an architect and full Professor at the Faculty of Architecture and Urbanism (FAU), Polytechnic University of Tirana. He has many years of experience as Dean of Faculty of Architecture and Urbanism and Head of Architecture Department at PUT. His practice, teaching activity and scientific research have been oriented towards architectural design, housing, preservation of historical heritage and urban regeneration. He has conducted scientific qualifications and teaching activities at several international universities. Also, he has participated in various scientific conferences and has published a series of scientific articles, references, monographs.

Prof. Nepravishta professional opus also includes numerous exhibitions, workshops and International Conferences (IFAU17, IFAU18, and IFAU19). He has been a member of the various international conference scientific committees and editorial boards of several national (“Monumentet”, “Buletini i Shkencave Teknike”) and international journals (“Arhitektura i Urbanizam”, “South-East European Journal of Architecture and Design (SEEJAD)”, “International Journal of Civil Engineering and Architecture”, “Magazine of Civil Engineering”) and Scientific director of the Collana series “Forum for Architecture and Urbanism (FAU)” of the publishing house “La scuola di Pitagora editrice”, Italy. He has been a member of the Senate of the Polytechnic University of Tirana, board member of Scientific Council of the Institute of Cultural Monuments, Presidency member of Albanian Association of Architects, EHNR and IFHP. 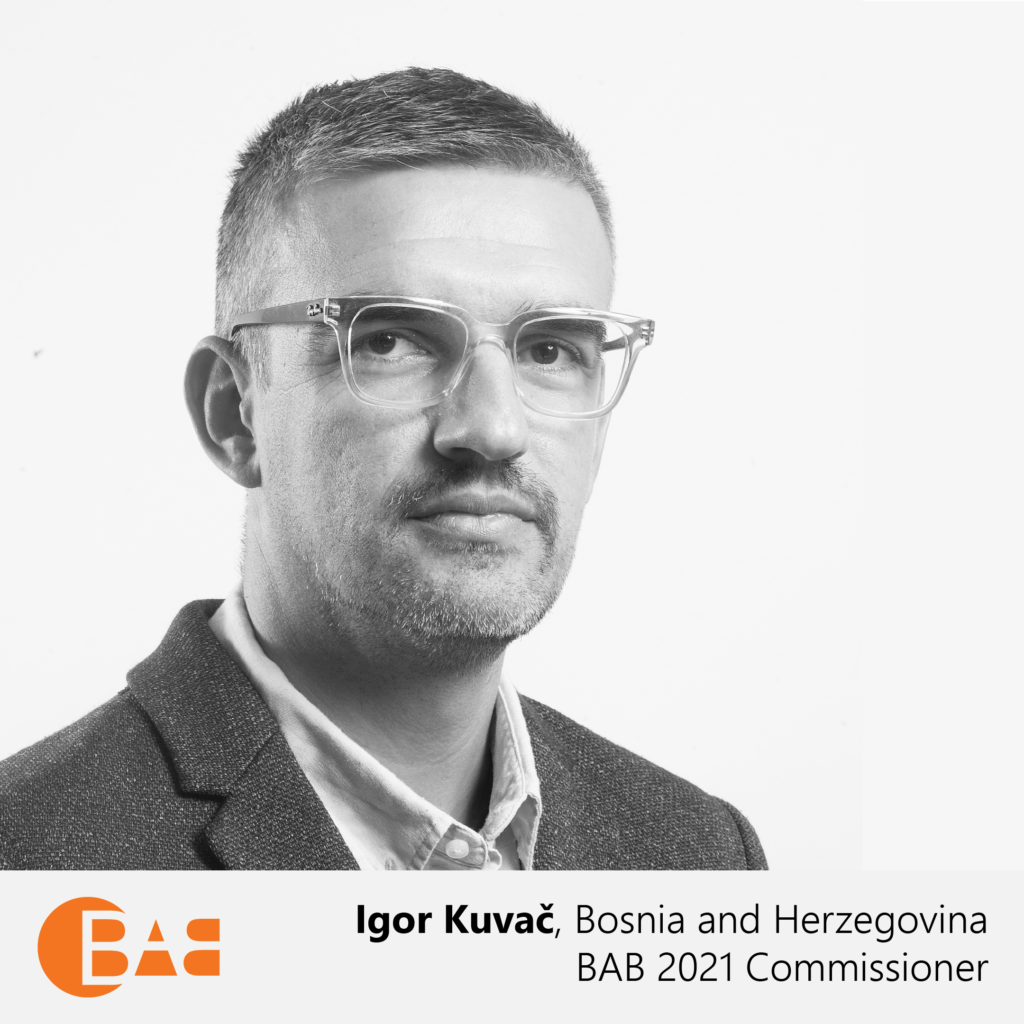 President of the Center for Spatial Research

Igor Kuvač was born on February 22, 1984 in Sarajevo. He completed his undergraduate and master studies at the Faculty of Architecture, Civil Engineering and Geodesy, University of Banja Luka (AGGF), as a student of the generation, 2009. He received a PhD title from the University of Granada (Spain) in 2017 as an Erasmus Mundus Fellow researching the topic Forced Transition – New settlements of displaced persons after the war (1992-1995) in Bosnia and Herzegovina. He is employed as an assistant professor at the Department of Architectural Design at AGGF, where coordinates the Master study program Architecture and Urbanism, and teaches different scales of architectural and urban design. Igor is a co-founder and head of the Center for Spatial Research, which experiments with innovative models of co-creation in urban public space, in which he coordinates Small SCALE and other projects. His research scopes are different spatial scales as well as the cultural context of contemporary urban transformations, focusing both on urban and anthropological themes. 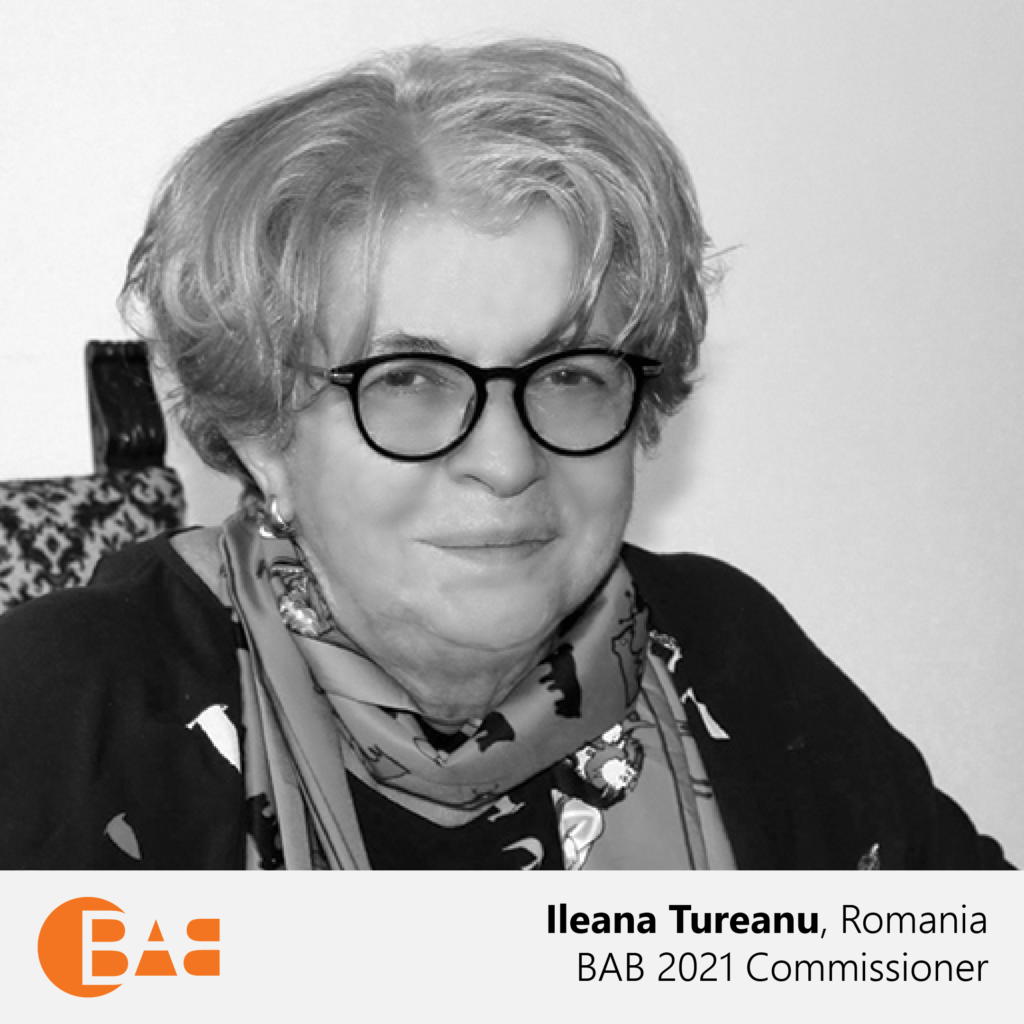 Ileana Tureanu is a Romanian arhitect and urbanist who practiced and worked in public and private practice for over 40 years and was involved in important national projects and architecture magazines, in order to place architects and architecture in the position they deserve. She is the president of Union of Architects in Romania since 2016.

ITU was born in Bucharest and graduated „Ion Mincu” Institute of Architecture of Bucharest.

Since 1980, ITU has been the lead designer for many new developments, urban retrofit, neighborhood revitalization and public and private buildings some of them award-wining projects.

Since student years, she published, on a permanent basis, in Arhitectura 1906 magazine and conceived and co-edited the following publications Arhitext magazine and Urbanismul magazine, published many articles and studies in the professional press and now leads Arhitectura magazine.

She was involved in public live as a promoter and general manager of the first foreign investment complex development in post-revolution Romania, namely World Trade Center Bucharest (1993-95).

Between 2000 and 2004, she served as deputy ministry of public works (2000-2004). She promoted international projects in her capacity of Executive National Coordinator of  Stability Pact, vice-president of Council of Europe’s EUR-OPA Major Hazard Agreement and established, in 2002, the National Center for Seismic Risk Reduction, a Romanian-Japanese technical cooperation , implementing The Project on The Reduction of Seismic Risk for Buildings and Structures, where a consistent cooperation with Serbian academics and scientists was foreseen (she was awarded Serbia Medal “SYSTEM DC 90”, in 2002).

Since 2016, she lectures and developes projects and events devoted to the cultural heritage of Romanian architecture,  stressing the female architects role, promoting the role and importance of multi-cultural professionals, understanding their positive role in Romanian culture.

ITU is coordinated the National Architecture Bienale in Romania (2018, 2021) with a participation of over 600 projects. 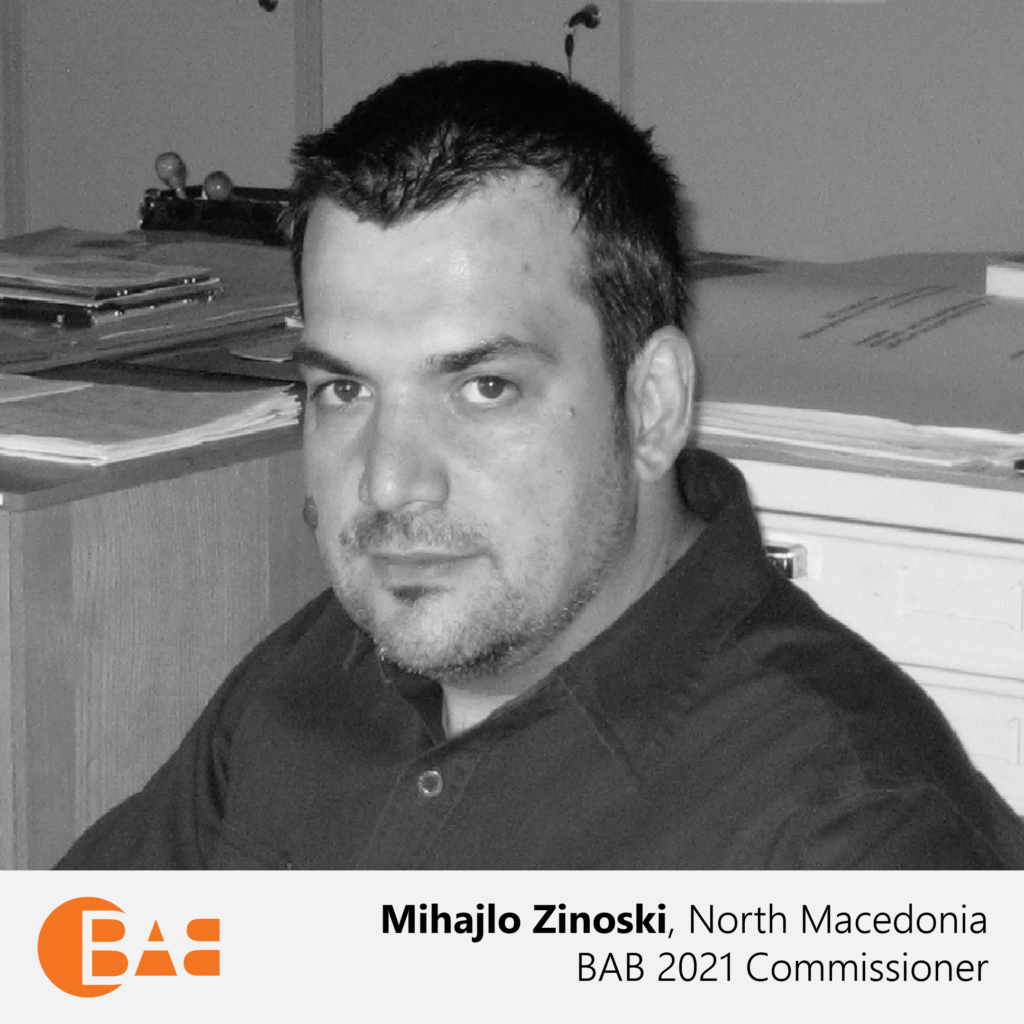 Mihajlo Zinoski is an architect and professor at the Faculty of Architecture of the Ss. Cyril and Methodius University in Skopje, North Macedonia since 2000 where he received a PhD in engineering science. Since 2009, he has lectured in the designing of public buildings in the Institute for Architectural Design where he is also acting as design studio coordinator. At 2008 he was a visiting researcher at the School of Architecture and Allied Arts, University of Oregon, as part of the Junior Faculty Development Program founded by the US Department of State. He received an honorable mention at the Biennale di Architettura di Venezia, 2006 for the collective project “City of possible worlds” in the category of national presentation. In the past five years by an interest in the area of social sustainability of the built environment he initiated lectures, international and domestic workshops, exhibitions, and projects of participatory action between academia and local municipalities. As scientific-pedagogical results since 2017 he published articles in Proceedings of International Scientific Conferences, Emerald Insight Journal, in monograph CURRENT aspects of real estate research Institute of Real Estate Studies also article in the summary book Global Dwelling, carried out by OIKONET, an Erasmus Network project.